Padel as a sport has picked up a lot lately, and before you begin playing any sport, you should understand the area of play first. This helps you master your skills better and understand the technicalities behind the rules of the sport. Padel courts are quite similar to Tennis courts but even easier to understand. Here’s everything you need to know about them. 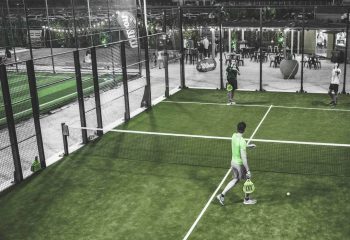 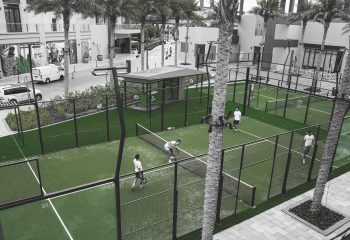 Padel Park was started with the aim of bringing the sport to everyone. As of now, we have two courts that are approachable to people from all over Dubai. Players who reside in the Jumeirah area can take advantage of our The Pointe West court. As for the players residing around Al Barsha can head over to our Ripe Market branch. Here’s a quick overview of our locations:

Our Ripe Market location has a total of three outdoor courts.  All of these courts are double courts and have plenty of lighting around if you choose to play at night time. The courts are open from 6AM to 12AM all 7 days of the week. Rates per player starts at AED 75 for 60 mins and goes up from there depending on the time frame you choose. As for the whole court, it can be booked for a starting price of AED 300.

The Pointe West location is more accessible for people coming from the Jumeirah area.  This location also comprises three outdoor courts.  While two of those courts are made for doubles (4 players), the other one is a mini court made for players wanting to play in singles. Just like Ripe Market, the courts here also have plenty of lighting to assist players while playing at the night time.

The courts are open from 6AM to 12AM all 7 days of the week. For the standard courts, rates per player start at AED 80 for 60 mins and the whole court can be booked for a starting price of AED 320.

The mini-court has been designed to accommodate 2 players and the per player charge for it is set at AED 100 for 60mins. Due to the offer, you will be able to book it for just AED 70 per player. Also, with the offer, the whole court is available for a starting price of just AED 140.

If you have played tennis before, the first thing you will realize is that the Padel court is relatively smaller than a tennis court. It is, infact, 25% smaller than a regular tennis court. This means that a standard padel court is just 10 meters wide and 20 meters long. As the court is smaller, the players do not need a lot of strength and power to play the game. All it requires are some strategies and a game plan with a little bit of speed.

As per the guidelines, the courts at Padel Park are surrounded by walls made of glass. The walls on the sides are 3 meters tall and the ones on the front and back are 4 meters tall, with 3 meters being the glass and a meter dedicated to a net. The glass used here is a 12mm impact-resistant glass like seen in squash courts. Padel courts have framed steel panels that support the glass and weld mesh panels.

As for the padel net, it is 88cm in the middle and it gradually increases to 92cm towards both ends, with a tolerance of only 0.05cm. The whole net is 10 meters long and is kept suspended by a metal cable that has a maximum diameter of 1cm. The ends of the padel net are attached to two lateral posts with a maximum height of 1.05 meters.

Padel net plays an extremely important role in the game. While playing, if the ball fails to cross the net, the player who hit the ball loses a point.

Padel court surface and the lines

The playing surface of a padel court is comprised of a single-tone sand-dressed synthetic surface. This is made from either fibrillating or monofilament tufts. According to the International Padel Federation, the surface should have the following specifications for optimum performance of the players:

We at Padel Park have used the best material possible and followed all the guidelines of the IPF while constructing our courts.

Lines and patterns on a padel court

The lines drawn on the padel courts have everything to do with the rules of padel. The lines help players in practicing a perfect serve and also helps track the points. For instance, while starting a game, the player giving the first serve has to stand behind the service line and make sure they hit the ball into the diagonal service box on the opponent’s side. As a part of the rules of playing the game, the first bounce must hit the service box.

It is not just the lines that play a major role in the game but it is also the fence. The serve should not hit the wire fence after the first bounce. In the scenario where that happens, the player will get a chance on a second serve. While serving or playing, the ball should always hit the ground first before hitting the walls.

It is also worth noting that the player is allowed to use their entire side of the court while playing. However, while serving, they have to stay behind the service line.

Padel is a sport that can be played both indoors and outdoors. This is something that sets this game apart from other racket sports. But if you are just getting started with the game, which court you should prefer and why? Let’s find out with a quick explanation of both the courts.

Indoor courts have the edge over outdoor courts when it comes to the weather. Indoor padel courts Dubai allow players to enjoy the game even when it is raining, or there is a sand storm going on outside.

Outdoor courts, on the other hand, allow the players to enjoy the sport outside when it’s pleasant weather. Also, they are not restricted by any roof, which means there is no chance of hitting the ball on areas above the walls.

What is a Padel court?

A padel court is 25% smaller than a regular tennis court and it is specially designed for the growing sport.

What are the dimensions of a Padel court?

Can padel courts get noisy?

Padel courts are surrounded by glass walls, which is why one might constantly hear the loud 'pock' of the ball against the walls.

What are padel courts made of?

Padel courts have a synthetic turf play surface and they are surrounded by glass and weld mesh rebound wall and fence panels.